Several upcoming performances have been canceled or postponed due to COVID-19; see list of all upcoming events for current information.

This past December, librettist Megan Cohen and I headed back to Houston for the first music workshop of Turn and Burn,Â our chamber opera commissioned by Houston Grand Opera through HGOco’s “Song of Houston” initiative. Four days of work with our performers and directors culminated in a presentation of the complete 75-minute score, drafted for a reduced orchestration of piano, electric and acoustic guitar, and drum set.

Since then I’ve been revising and orchestrating in anticipation of our second music workshop May 18-22, which will include the full score for rock-classical octet! We’re thrilled with how the piece is taking shape and excited to be taking these final steps in its development towards the premiere production in February 2021.

In the meantime… on Wednesday, March 11 at 7:30pm,Â rodeo fans will previewÂ the operaÂ in a performance byÂ Miss Leslie and Her Juke JointersÂ at Rodeo Houston’s “Stars Over Texas Stage”! This reprisal of HGOâ€™s Rodeo Songs cycle will include the World Premiere of “Next Rodeo”â€”myÂ country song with lyrics by Megan, sung from the perspective of a barrel racer on the road, adapted from the opera. This will be the firstÂ performance of my music by a honky-tonk band!Â Learn more about the event.

Several upcoming performances have been canceled or postponed due to COVID-19; see list of all upcoming events for current information.

Transform the World with Beauty, my choral cycle inspired by the visual art and poetry of Victorian Britain, is being featured in concerts by three separate ensembles this spring!

I am honored that my piece was selected by The Astoria Choir as a winner of their Call for Scores for a program celebrating International Women’s Day. This Saturday in Astoria, Queens, the choir will be performing the first movement, “My First Camera,” which sets a delightful autobiographical text by pioneering photographer Julia Margaret Cameron.

Next month another ensemble, Williams College Chamber Choir will perform the second movement, “In an Artist’s Studio,” in two performances featuring their ensemble of women’s voices. This movement features Christina Rossetti’s poetic critique of a painter’s depictions of an idealized woman.

Looking further ahead to June, the Grammy-nominated Skylark Vocal Ensembleâ€”who commissioned and premiered this work in 2019â€”will reprise the full cycle, including the third movement celebrating the designs and aesthetic philosophy of William Morris. Stay tuned for details!

In the meantime, listen toÂ Transform the World with Beauty in the brilliant live recording by Skylark, paired with the texts and visual art that inspired my composition.

I foundedÂ Landscape Music five years ago (how time flies!) to create an online platformÂ forÂ stylistically diverse composers and composer-performers whose music engages with landscape, nature, and place.Â I’ve watched this project grow to include 25Â members, and to serve as a catalyst for wonderful collaborations with performers and organizations around the country.

Learn more and view all of the participating projects atÂ LandscapeMusic.org!

Additional projects will be announced throughout the year on our website,Â and on ourÂ FacebookÂ andÂ TwitterÂ pages. To be notified of major announcements, including the release of free streaming music and video, considerÂ joining our Landscape Music mailing list.

Each of these poets used vivid descriptions of winter phenomena to convey moments of profound connection to the natural world. Iâ€™ve grouped these poems together because I feel they form an aesthetically cohesive set, providing the basis for a musical narrative arc that moves from quiet contemplation (â€œWinter Branchesâ€) to joyful exuberance (â€œA Winter Rideâ€).

I hope you may be able to join me at this very special performance!

Next month, librettist Megan Cohen and I head back to Houston for the first music workshop of Turn and Burnâ€”our chamber opera commissioned by Houston Grand Opera’s HGOco for premiere in Spring 2021.

Four days of work with our performers and directors will culminate in a presentation on December 9th of the complete 75-minute score, drafted for a reduced orchestration of piano, electric and acoustic guitar, and drum set. Revisions and orchestration will follow, leading to a full score workshop in 2020.

I can’t wait to share the fruits of this process with you all!

GRAMMY Award-nominated vocal ensemble Skylark gave absolutely stunning premiere performances of my workÂ Transform the World with Beauty,Â which they commissioned for their Spring 2019 program “Masterpiece” featuring musical reflections ofÂ visual art. They recorded my piece during their tour’s culminating concert on the Georgetown Concert Series in Washington, D.C.

In the following video, I’ve paired the ensemble’sÂ recordingÂ with texts and images from the Victorian artistsÂ and poetsâ€”Julia Margaret Cameron, Christina Rossetti, Dante Gabriel Rossetti, and William Morrisâ€”who inspired my composition.

Watch below (or on YouTube here), and continue reading for my notes about this work.

Transform the World with Beauty,Â an 11-minute work for SATB vocal ensemble in three movements, is inspired by the flowering of visual art and poetry in Victorian Britain during the 1840s-1870s. 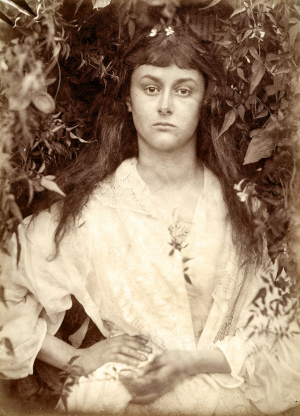 The first movement, â€œMy First Camera,â€ celebrates avant-garde photographer, Julia Margaret Cameron. In my adaptation of an excerpt from Cameronâ€™s autobiography, this pioneering artist describes the power of her creative impulse when she first took up the camera as a 48-year-old wife and mother. (Image:Â Julia Margaret Cameron, “Pomona,” 1872.) 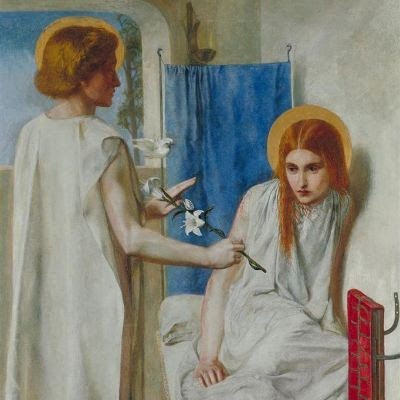 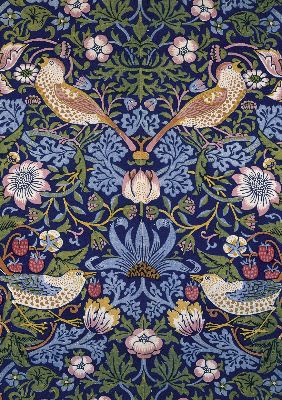 The final, title movement is inspired by the work and ideas of William Morris. The botanical and mythological titles of Morrisâ€™ sensuous textiles and wallpaper designs are juxtaposed with lofty sentiments from his philosophical lectures and essays. These two strands of Morrisâ€™ world, disparate at first, come together into a hopeful vision of society â€œtransformedâ€ through the beauty of nature and art.Â (Image: William Morris, “Strawberry Thief” wallpaper design, 1883.)

In the following video, I pair the ensemble’s gorgeous studio recording with my photography of the music’s inspiration: four site-specific land art installations by Andy Goldsworthy in the Presidio of San Francisco, CA. Video of a live performance of Transforming ForestÂ on Montage Music Society’s Altazano Salon SeriesÂ is also available for viewing.

Watch both versions below (or on YouTube here and here), and continue reading for my notes about this work.

Transforming Forest was commissioned by Montage Music Society for World Premiere at SITE Santa Fe in March 2019. InÂ this work for violin, cello, and piano, each short movement is inspired by one of four site-specific installations created by British artist Andy Goldsworthy in the Presidio of San Francisco: a park and former U.S. Army military fort in the Golden Gate National Recreation Area. These remarkable installations were created by Goldsworthy between 2008 and 2014 using organic, on-site materials such as tree branches and soil.

Sites of urban wilderness in the Bay Area have frequently served as points of reference in my creative process. The Presidioâ€™s landscape of eucalyptus and cypress was formative: my childhood home was steps from the sites where these installations were later created. Having made countless pilgrimages to these works by Goldsworthy, I felt impelled to formulate a musical response to these powerful places.

Goldsworthyâ€™s four Presidio installations are transformed through the growth of surrounding vegetation, the elements, the passage of time, and visitor interactions. In my response, I sought to evoke different kinds of transformation connected to each of the four installations.

Wood LineÂ is a long, curving line of eucalyptus branches (1,200 feet) placed along the forest floor. Many times, Iâ€™ve traced this path with my own feetâ€”walking alongside it, or balancing on top of the branches themselves, the surfaces of which have become smooth from the wear of footsteps over the years. In my response, â€œTracing,â€ a musical motif is continually â€œtracedâ€ through heterophony: picked up by each of the instruments in different tempi and registers.

Tree FallÂ is a tree trunk suspended from the roof of a small, disused military building. The trunk and roof were covered in wet clay, which developed intricate, cracking patterns on its surface while drying. In â€œCracking,â€ a dark, chorale-like music, conveying the womb-like interior of the building, â€œcracksâ€ open into a rhythmically dynamic middle section.

Goldsworthy createdÂ Earth WallÂ by burying and then excavating a sculpture made of eucalyptus branches from within a rammed earth wall at the Presidio Oï¬ƒcersâ€™ Club. A lively third movement, â€œExcavating,â€ evokes the spherical tangle of branches at the core of the wall through a building contrapuntal texture.

In the final movement, â€œObscuring,â€ climbing gestures in the piano are juxtaposed with sustained notes in the strings to capture the spatial quality ofÂ Spire: a 100-foot structure made from Monterey cypress trunks thrusting dramatically into the open sky. Contrasting material in triple meterâ€”tender at first, becoming increasingly robustâ€”gradually takes over. This music reflects the stand of young trees surroundingÂ Spire, which will eventually obscure it in years to come as these cypresses grow and mature.

Canadian Music CentreÂ andÂ Toronto Messiaen EnsembleÂ recently selected my workÂ RetraceÂ (2018) for flute, violin, cello, for inclusion on their Spring 2020 season! My piece was one of five selected from roughly 450 submissions to their international Call for Scores.

This will be the first performance of my music in Canada! I’ll announce the concert date and further details soon.

I’m thrilled to have beenÂ named winner of Boston Choral Ensemble’s 12th Annual Commission CompetitionÂ to write a work for their annual holiday concert!Â It’s a greatÂ honor to have been awardedÂ this highly competitive opportunity to continue expanding my work in choral and vocal ensemble music.

My planned work, Blue Shadows, Silver Sunlight,Â will feature poems by early 20th century American poets Margaret Widdemer, Sara Teasdale, and Amy Lowell, each of which use vivid descriptions of winter phenomena to convey moments of profound connection to the natural world.

Stayed tuned for an announcement of the World Premiere performance this December in Boston, MA!