A very dear friend and mentor, Lois Rudnick, has passed away. I’d like to share a few memories of her here.

Lois was a true intellectual with a seemingly boundless appreciation for the arts, culture, and the natural world. Her fierce drive to build a more equitable society through teaching, advocacy, and activism was matched by her unfailing (and sometimes outrageous) sense of humor, as well as her affectionate and nurturing spirit. She had an impact on countless people, and I’m very grateful to be among them.

Lois was a scholar, writer, curator, and Professor Emerita in American Studies at University of Massachusetts Boston, who retired to Santa Fe. We met in 2016 when I approached her as a fan of her authoritative biographies of Mabel Dodge Luhan, about whom I was writing a chamber opera (Mabel’s Call). Lois’s writings, and our conversations, significantly shaped my opera. She subsequently became an enthusiastic supporter and advocate for my work, collaborating with me on several public presentations. Our mutual appreciation was the start of a wonderful friendship.

Even in the last few months of her life, Lois published yet another book about remarkable people whose stories reflect the complexities of the American experience (Eva Mirabal: Three Generations of Tradition and Modernity at Taos Pueblo).

Lois lived in wholehearted engagement with the world around her, and I will always remember her for that with love and admiration. Thank you, Lois.

Here is a selection of Lois Rudnick’s works as an author and editor:

The accomplished faculty directors and student performers of the University of New Mexico Opera Theatre have spent the semester taking a deep dive into this opera and its historical inspiration: Mabel Dodge Luhan, the influential salon hostess, philanthropist, writer, and international icon of the avant-garde, and Taos, New Mexico in the 1910s and ’20s.

“The most mysterious and probably most affecting of the three works was Mabel’s Call, an opera whose trio of excerpts were so subtle and arresting they exemplified a sort of waking-dream feeling [the] characters each seemed to be lost in…the composer most called to mind was Ives.” ,THE COLUMN

Excerpts from my chamber opera Mabel’s Call were beautifully performed last month on Fort Worth Opera’s Frontiers showcase. An aria and two scenes were given a piano-vocal reading in a showcase of new operas.

The performance received some lovely press: in addition to a glowing review in THE COLUMN, I was interviewed for a preview article in The Fort Worth Star-Telegram.

It was a great honor to have my work featured on this platform, to share the stage with highly accomplished artists, and to receive feedback from a jury of opera professionals, as part of this project’s development!

I’m extremely honored that my chamber opera Mabel’s Call has been selected by Fort Worth Opera for their renowned 2018 Frontiers showcase! A 20-minute excerpt will be presented with piano accompaniment alongside other five other new operas-in-development during the Fort Worth Opera Festival at Bass Performance Hall in Fort Worth, Texas. Check out their press release for more information about each of the works selected for this year’s festival.

Mabel’s Call will be featured on Thursday, May 3, 2018. Tickets are $10 and may be purchased online.

Hailed as “one of the most significant music events of the year” by D Magazine, Fort Worth Opera’s Frontiers showcase has yielded numerous regional and world premieres since its inception. This program offers audiences a first look at the developmental processes for operas and gives emerging composers and librettists a platform to showcase their talents.

I’m incredibly fortunate to have Mabel’s Call continue its development as part of this amazing program. Learn more about this opera at mabelscall.com.

Inspired by the life of Mabel Dodge Luhan, Mabel’s Call is a lyrical opera in one act scored for six soloists, chorus, and chamber ensemble, with music and libretto by Nell Shaw Cohen. A universal tale told on an intimate scale, this work probes themes of identity, love, home, spirituality, and the search for a meaningful life. The opera’s story will resonate with audiences everywhere, even while it is deeply rooted in the culture, history, and physical landscape of Taos, New Mexico in the 1910s and ”˜20s. The Harwood Museum of Art and American Opera Projects have presented workshops of Mabel’s Call in Taos and New York City, respectively. To hear clips from the opera and learn more about the project, visit mabelscall.com.

I look forward to returning and continuing work on Mabel’s Call: my opera inspired by Mabel Dodge Luhan’s journey of self-reinvention in Taos during the 1910’s and ’20s. The Wurlitzer Foundation is located minutes away from Luhan’s historic home and all of the locales that were important to her life in Taos, and, consequently, my opera! It’s the perfect place to immerse myself in completing this opera-in-progress, my largest work to date, which I began researching about a year and a half ago. 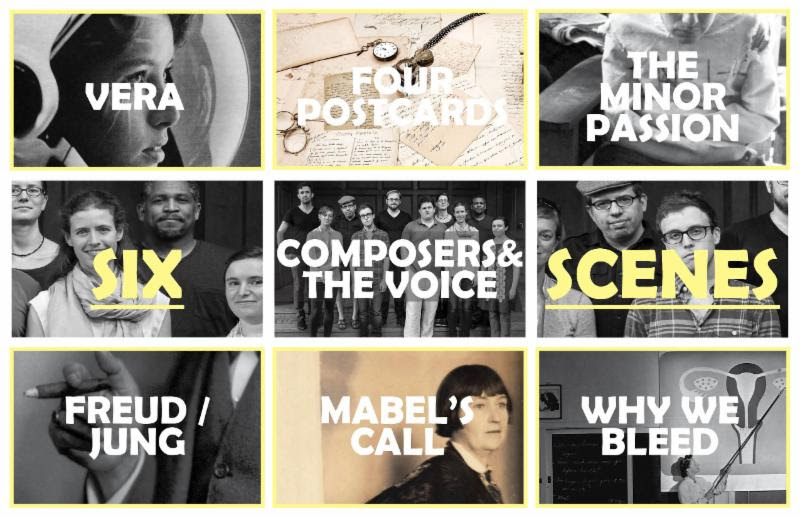 An excerpt from my opera-in-progress inspired by the life of Mabel Dodge Luhan will be featured this weekend on Six Scenes: an exciting showcase presented by American Opera Projects.

This concert previews the future of opera with an evening of scenes from six operas developed during AOP’s latest season of Composers & the Voice, the Brooklyn-based fellowship training program that I’ve been privileged to participate in since Fall 2015. 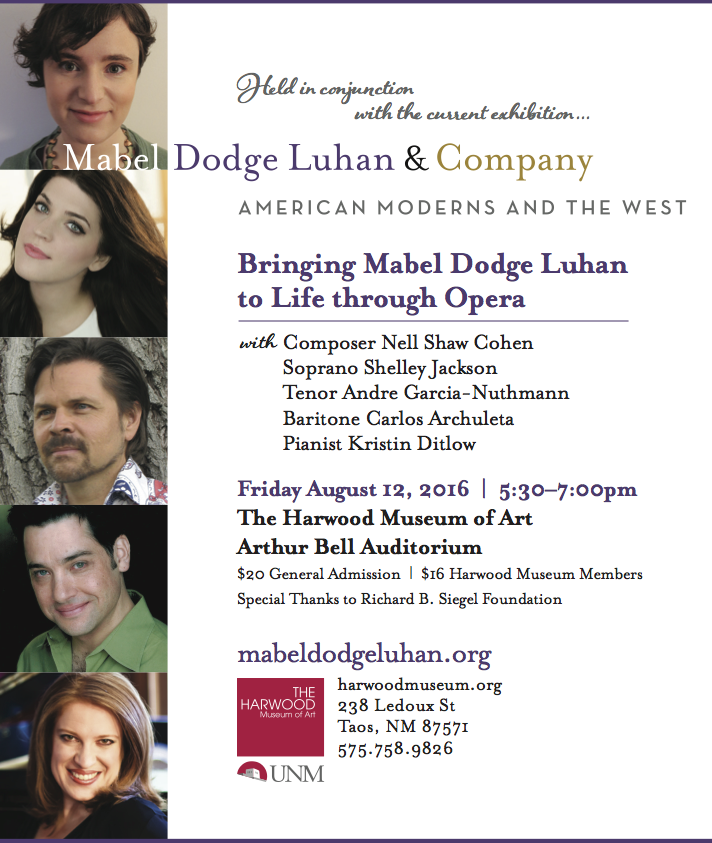