My piece will be performed by three outstanding presenters of new chamber music—Juventas New Music Ensemble, American Wild Ensemble, and Michigan Technological University Department of Visual and Performing Arts—as part of Lungs of the City: Olmsted’s Parks in Music, a concert series and all-World Premiere program of works by eight composers celebrating public parks and commemorating the bicentennial of the birth of legendary landscape architect Frederick Law Olmsted.

I’m honored to have co-curated and co-commissioned this program as Director of Landscape Music: an international network of composers and performers whose music engages with landscape, nature, and place.

Juventas New Music Ensemble gives the first performance on Saturday, March 26, 2022 in Cambridge, MA—which will also be presented as a free, live broadcast on YouTube!

Additional concert dates to be announced! 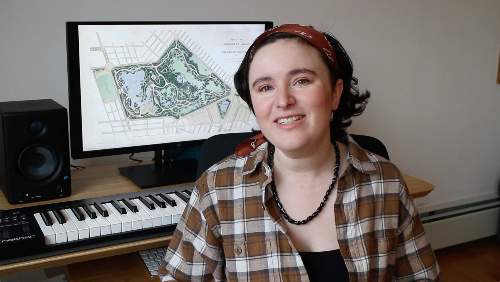 Commissioned and premiered by Boston Choral Ensemble in 2019 through their 12th Annual Commission Competition, “Blue Shadows, Silver Sunlight” features settings of three poems on the theme of winter: “Winter Branches” by Margaret Widdemer, “A Winter Blue Jay” by Sara Teasdale, and “A Winter Ride” by Amy Lowell, all written in the early 20th century by American women. Each of these poets used vivid descriptions of winter phenomena to convey moments of profound connection to the natural world.

Any of the three movements may be programmed separately as standalone works for performance. Read the program note and view the perusal score here.

I’m delighted to have been commissioned by extraordinary soprano Laura Strickling to write an art song for The 40@40 Project! Praised by The New York Times for her “flexible voice, crystalline diction, and warm presence,” Laura is personally commissioning 40+ art songs for her ambitious and visionary project.

For this song I’ve collaborated once again with my wonderful librettist and sister, Megan Cohen. Titled Woman Walking, our song is a portrait of a solitary woman and present-day flâneuse sauntering city streets. I can’t wait to share this work with you soon!

I am thrilled to have been commissioned by Skylark Vocal Ensemble to compose a new work for virtual high school and college choirs, to be featured alongside a work by composer Jonathan Woody! Skylark’s fundraising campaign, New Voices for Education, will fund our commissions and the ensemble’s production of free world class online study guides to support young singers performances of these new works in this era of remote learning.

I’m continually impressed by Skylark’s innovative projects through the pandemic and so proud to be participating in this fabulous initiative for choral education!

Learn more about Skylark: New Voices for Education and contribute to the campaign.

UPDATE:  This campaign is now complete!  Thanks to the generous donors who contributed $275 to Fair Fight, ACLU, and Rock the Vote Action Fund. As thanks, I will be donating free digital scores of Horizon for solo cello from October 5 through November 2, 2020.

Want to support our U.S. democracy while making scores of my chamber music accessible to more musicians? Please consider contributing to my fundraising campaign, Free Music for a Fair Election!

Donate through ActBlue here. Your contributions will support three organizations working for the integrity of the democratic process: Fair Fight, Rock the Vote Action Fund, and the ACLU.

To encourage donors to hit my fundraising goals before Sunday, October 4, 2020 (30 days before the General Election), I will be making scores for solo instruments, selected from my composition catalogue, available for free digital downloads:

If we raise $200, I will release the score of “Horizon” for solo cello for free download.

If we raise $500, I will add the score of “Walks at Brush Creek” for solo piano.

Finally, if we raise my goal of $1,000, I will also include the score of “Triptych” for solo classical guitar.

After this campaign is complete, musicians will be able to download the free digital scores from my website (nellshawcohen.com) from October 5 through November 2, 2020.

Thank you so much for helping me to support the incredibly important work these organizations are doing!

(Disclaimer: Only contributions received via my ActBlue fundraiser through October 4 will be counted. But you are very much encouraged to continue donating to these organizations after the campaign!)

About the Charitable Organizations

Fair Fight is an organization founded by Stacey Abrams to promote free and fair elections by fighting voter suppression efforts, particularly against people of color. They defend people’s right to vote through litigation, legislation, and grassroots activism and organizing.

Rock the Vote Action Fund is dedicated to building the political power of young progressives and leveraging that power for action on issues that affect their lives. They are the sister organization of Rock the Vote, which for 30 years has revolutionized the way we use pop culture, music, art, and technology to engage young people in politics and build our collective power.

American Civil Liberties Union (ACLU) is fighting back against attempts to curtail an essential right in our democracy, the right to vote, and working to advocate for policies that make it easier for Americans to vote.

Click the titles for recordings and more information about these works.

Horizon (2013) for solo cello is a sparse, atmospheric work written to celebrate and reflect the aesthetic quality of the Parrish Art Museum in Water Mill, NY, and the surrounding landscape of the East End of Long Island (my former home). It has been given wonderful performances by cellists including Louise King, Karlos Rodriguez, Richard Vaudrey, and FjÃ³la Evans, and became part of a collaboration with dancer and choreographer Callie Lyons. Listen to Horizon.

Walks at Brush Creek (2017) for solo piano was inspired by my daily walks through rural Western scenery as an Artist-in-Residence at Brush Creek Foundation for the Arts, located on a ranch in southeastern Wyoming abutting Medicine Bow National Forest. With this score, I offer a musical illustration of my emotional responses to this landscape, from the ever-shifting cloud shadows playing over the grasses and sagebrush to the sweeping lines of wooden fences that frame them. Listen to Walks at Brush Creek.

Triptych (2011) for solo classical guitar was composed for guitarist Devin Ulibarri. Triptych (pronounced “trip-tik”) is a term from visual art describing an artwork divided into three sections that are displayed as a group. European Medieval and Renaissance triptychs were usually painted or carved wood or ivory panels connected by hinges for standing or folding, and would have two narrow panels flanking a larger, contrasting middle panel. My three-movement piece for solo guitar reflects this structural model. Listen to Triptych. 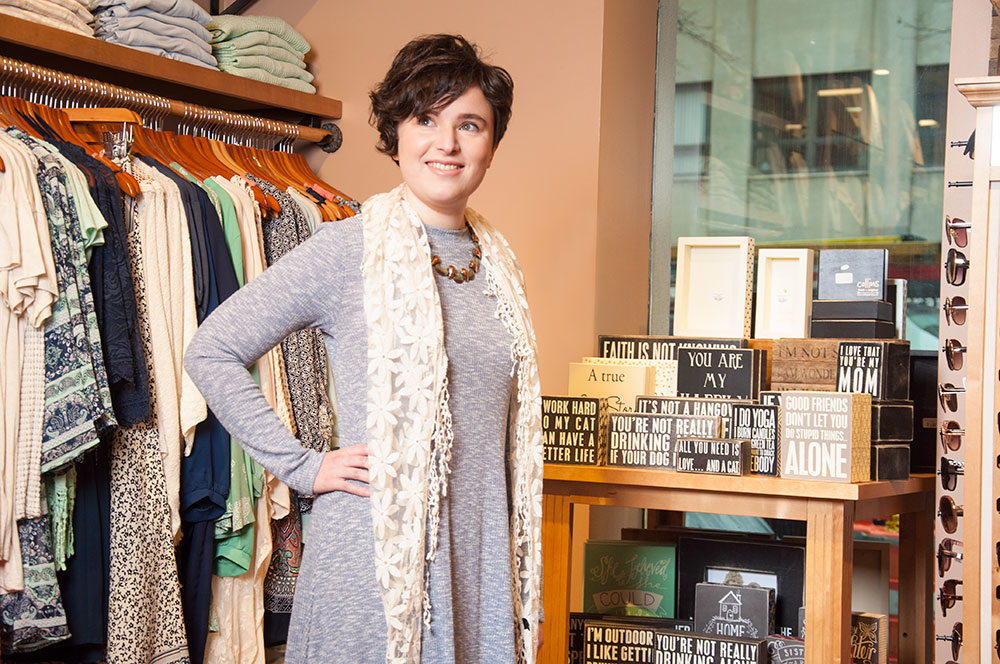 National clothing boutique Francesca’s included an interview and photo shoot with me and three other women in a feature on their blog and newsletter highlighting “inspiring women” in celebration of International Women’s Day.

As I write, The Hilliard Ensemble – the English male vocal quartet that has produced countless wonderful recordings of Medieval, Renaissance, Baroque, and contemporary Music – is onstage at Wigmore Hall, where they are celebrating a 40-year career and singing their final concert.

Much has been said about the Hilliard’s music and enormous legacy, but the ending of this group has caused me to reflect on what their influence has personally meant to me as a composer.

It was my encounter with the Hilliards’ recordings of new music around eight years ago that was perhaps the single biggest epiphany leading me to pursue classical training in composition and to channel my artistic efforts into concert music.

At around age 18, I found myself at a crossroads. Having independently released my one-woman-band progressive rock opus Tempus, my next steps were unclear for reasons both practical and creative. I felt that my current approach was no longer fulfilling my artistic inclinations and professional ambitions.

Although I first began listening to The Hilliard Ensemble because of my long-standing love of Early Music, it was their recordings of contemporary music that showed to me that the kinds of artistic expression I’d been seeking through other genres and methods of music making could be realized through “classical” performance practices, aesthetics, and venues. The album A Hilliard Songbook, in particular, opened up a world of possibilities to me.

The new music The Hilliard Ensemble recorded was unlike anything I’d heard. And, unlike the broad gloss of choral music, or the 19th century-derived aesthetic of modern operatic singing (both of which I have come to appreciate in their own right), there was an intense, jewel-like delicacy in the Hilliards’ singing. In one of my old favorites among their interpretations of newly-composed music, Stephen Hartke’s Cathedral in the Thrashing Rain, every note, rhythm, and gesture emerges in sharp relief; every opportunity for expression is captured and realized, born out of a tremendous sensitivity to text, line, and harmony.

Their performances were immaculate yet intimate; technical, yet seemingly effortless; overwhelmingly beautiful but, above all, utterly human. They blended their voices in a way that was both balanced yet individualistic, taking full advantage of the inherent transparency of the small ensemble sound. Whenever I have listened to this group, I hear not only “The Hilliard Ensemble” but the perfectly allied voices of David James, Rogers Covey-Crump, Steven Harrold (or John Potter), and Gordon Jones, plus the ineffable ambience that the combination of those voices produces.

Although I had certainly experienced classical music before hearing The Hilliard Ensemble, through their recordings I began to realize that contemporary concert music might be “my” music.

It was with all of this ringing in my ears that in 2007 I wrote a 12-minute setting of Saint Augustine for solo soprano, countertenor, tenor, and bass, titled Memory (listen to an excerpt). This was my first completed composition that was 1) fully notated, 2) envisioned for classically trained performers, and which 3) didn’t involve drum set and/or guitar! I was extremely fortunate to have the opportunity to record this work with top-notch singers in NYC (members of Lionheart, et al).

This recording went into my artistic portfolio and helped me to secure spots and scholarships in several composition programs (including New England Conservatory, where I went on to pursue my Bachelor of Music). Now, seven years later, I’ve completed a Master of Music at New York University and produced compositions and performances for chamber ensembles, orchestra, multimedia, and voice, including a staged one-act monodrama for tenor, The Coming of Spring, .

As The Hilliard Ensemble ends its long career this evening, I’m faced with the knowledge that I’ll never have the opportunity of fulfilling my “bucket list” dream of composing a work to be performed by this group. However, while contemplating the pivotal influence that the Hilliards had on my path, I renew my hope that I might someday have an opportunity to revisit writing for small vocal ensemble and continue following the inspiration of this group in future, unforeseen ways.

I was honored to be selected for the New York University Orchestra composer reading and recording session on November 19. The student orchestra had a brief rehearsal and run-through of the second movement of my Symphony No. 1, led by David Rosenmeyer, conductor.

You can listen to the recording on my website, alongside the reading of the first movement of the symphony from last spring by the New England Conservatory Philharmonia.

Listen to Symphony No. 1, first and second movements

Two more movements of this four-movement symphony have not yet been recorded.